An End and a Beginning

Finally some happy people cruising the streets. After a somewhat disappointing host in Moscow, the spirits around the gang had been hit hard. Some frays in the rich tapestry that had been woven showed some signs of unravelling, which is inevitable when nine people are living and moving and snoring in close proximity to each other for 21 odd days.

But Moscow still had some incredible sights. Red Square, Kremlin, were obvious big ticket numbers and of course our old friend St. Basil's. I was a bit disappointed that Russia's patron saint of herbs, St. Dill, did not have an impressive edifice in his honour. However, his permeating fragrant flavour was celebrated liberally in daily life, so who is the real winner?

After hitting the pavement hard, it was a final overnight train to St. Petersburg. For mine, this is where it's at in Russia. Canals, Hermitage, Church of the Saviour on Blood, St. Isaacs. The vibe was a little more chilled as well, whilst still predominately expressionless mannequins devoid of emotion was the default Russian way, the locals would engage with you a bit more here. Some also appeared happy to be at work. Some brilliant primo bohemian joints were to be found as well. Perhaps it was the heads up from our local lass that helped. A little bit of the Brunswick/Fitzroy vibe was welcome at this stage. We had hit upon a good run of food as well. After Emma and I demolished some ribs and burgers with craft beer in Moscow, I was happy to eat at an equally sweet burger joint close to our digs. The local drops were a little less watered down as well.

A big night was had on our penultimate night as a Family unit. We hit upon a sports bar, after a final spot of herding cats, we managed to seat ourselves and the drinks began. 3.5L of beer for about AU$18 seemed like a reasonable deal. So too were cheap shots. A round of Absinthe was had. Food orders place, and for once everyone's meal was delivered under 3 hours. The method of food delivery appeared to be whenever the chef decided he/she wanted to cook it, not when it was ordered and certainly not all the meals on a single table at the same time. But that's just the way.

The Hermitage is nuts. The prevailing joke is it takes 3 years to see everything. that didn't stop us cracking it open in 1.5hrs though. Apparently there is a Rembrandt or some such other famous painting that is a major drawcard. Some of the team were a bit disappointed to find out that it had been replaced by 70,000 people taking photos of themselves in front of it. Which also seemed to be the correct response when seeing newlyweds having their photos taken, why would you take a photo of someone else's wedding. Emma and I tried to appear in as many of these photos as possible. Not the actual wedding photos. Emma also spotted some people filming the virtual tour inside Saviour of the Blood. Whilst all around them there was a surprisingly realistic actual physical representation of the actual Church, complete with all of the space-time continuum and having the distinct advantage of been reality. Whoever invented people should have tried to make them a little less idiotic.

Now I find myself kicking back at the airport awaiting my flight to Munich. The first change in my plans is underway. At one stage on the tour, Dan and Sarah suggested joining them in Krakow. So I am. Having watched 2 games of the RWC huddled around my laptop, scoring a pair of All Blacks shorty shorts, it seems us Kiwis better stick together. By a strange twist of fate, Sarah and Dan left the day earlier and Sarah dropped her necklace under her bed. Thanks to a quick message, I was able to find it and now can deliver it in person. Flight to Munich turns into a flight to Frankfurt, then onto Krakow. Should be cool. Then it's Amsterdam bound on the 29th, a catch up with Emma from the tour and then time to pay homage to the gods of Metal.

The rain has started to fall in St. Petersburg this morning. Luckily it has been a pretty good run, not too cold and clear sunny days. Looks like the Divine Canopy may be required once more. We only passed through a small patch of snow somewhere between Siberia and the Urals. Perhaps I will see it again?

Farewell Russia, I may miss your Birch trees eventually. 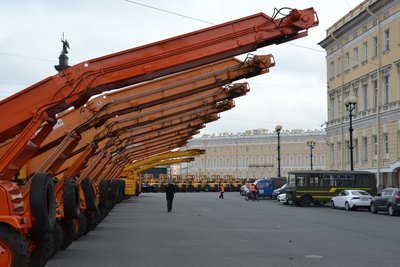 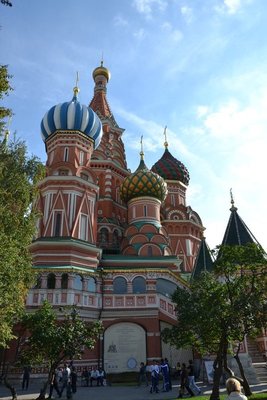 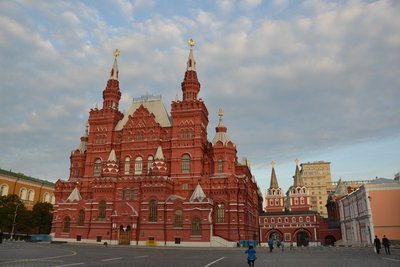 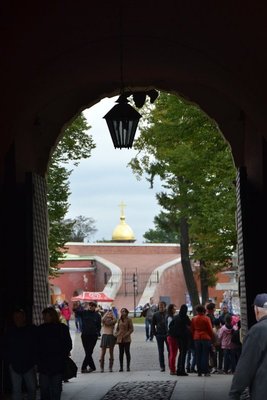 Great blog Daniel. Do I detect a bit of sadness that the 21 days are behind you? Glad to hear that the be prepared flexibility of scouts has kicked in and that a little detour is in order. Sounds good. Great photos. In Pauline Hanson's words /Please explain the first photo. Are they tractors or cranes or something more sinister to do with the red army or are they Russian cherry pickers? Or none of the above. Cheers big ears and keep safe.

by No canopies here

A bit of sadness indeed, but that's the way it goes. It was a long time though.
The first photo is outside the Hermitage in St. Petersburg, turns out the day we went the entire city's snow plow battalion had marshalled for a bit of a PR/ Mayor's inspection. Quite the bizarre site it was!
Side note, border control into Germany involved quite the grilling from the authorities. Also a number of inter-country train lines have been suspended into Germany. I think they are also looking to temporarily exit the Schengen Convention of open borders.

Oh right thanks. Yes it is a bizarre site. I imagine all those border crossings look a bit different now with what is going on. Enjoy Kraków and the head banging or whatever they do at those heavy metal concerts.

by No canopies here