What’s crack’n people? It’s been almost a year since my last adventure. The time is finally ripe for another instalment in this blog. Over the year, I’ve been pleasantly surprised to see that an audience beyond family and friends has been perusing my rambles, I’m not sure if it is being viewed as an actual tool for ideas when travelling to parts unknown, if that’s the case, hopefully in amongst the strangeness something useful has been gleaned. With that in mind, I’ll try and include some more pertinent information on locales and the like.

Auckland is a sprawling city, with problems not unlike many parts of the world. A lack of investment in critical infrastructure necessary for a growing population. An increasingly common refrain from many of us in our developed worlds is that governments seem to be reactionary and not well equipped to forward planning. So, relying on public transport to get to our base of operations, would have been frustrating, but not impossible.
Our headquarters for the week was in a sleepy hamlet near Orewa. For your sake and mine, I will provide a helpful pronunciation guide for some critical place names. As a child, I did have a speech impediment, that I would argue still rears its head on occasions. My guide probably should be ignored.

If I tell you where Emma lives, you all might move there and ruin its peaceful vibe. Orewa (oar-ree-bar) is a delightful place with the whole area between the east and west coasts seemingly ripped right from the pages of Footrot Flats. On our many excursions, north, northwest, west, north-north west and left at that junction, I expected to see the Dog running down the undulating valleys with an upturned water-tank attached to his collar.

Speaking of collars, here is a fancy camouflage harness attached to an awesome pup, Jasper, my host and hostesses young hound. 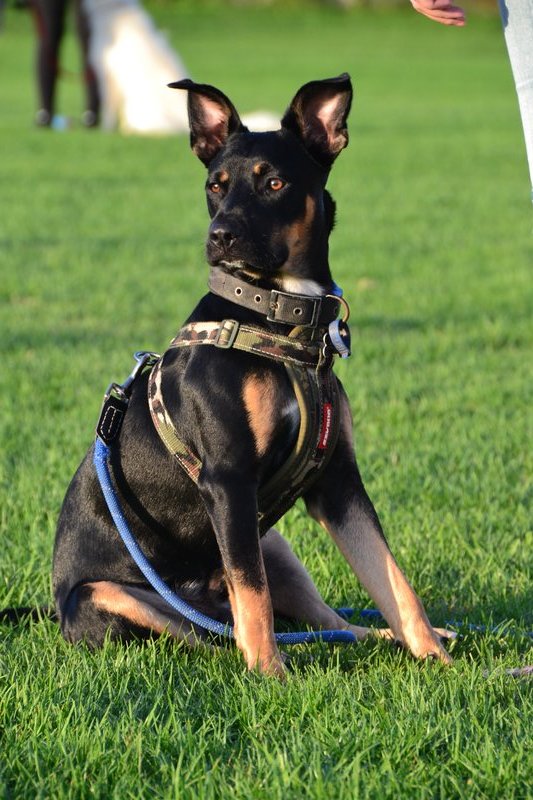 He did accompany us on some excursions, most notably when we visited Emma’s parents place, running riot with a collection of hounds both bigger and hairier then him. The highlight, amongst many, was E’s mum’s long heralded Yorkshire puddings. The logic of having a full roast with all the trimmings in summer was questioned, but thankfully not vetoed. It was with much delight that I savoured every morsel of that meal. Seriously, probably the best roast I have had in my life. I will be back. The copious amounts of wine that I drank that night left me a little dazed the next day, but, with prescient foresight a date with ribs was on the schedule.

Along the Hibiscus Coast Highway in downtown Orewa is a joint called Coast, which once a month does all you can eat ribs on a Wednesday. This is well worth the visit if you get the chance. I mean, Ribs. That you can keep eating. Until you can’t eat any more. Ribs…is there nothing sweater in the animal world than a plentiful portion of portly Porcine protrusions? You can drink as well and you should, but be responsible. New Zealand is one of the best places in the world, I think, to drink beer. There is so much craft beer been brewed, that you need to hop to it, if you want experience it all. That was a lame beer pun. Hop-fully you got it.

Much of the adventures were based on places to drink. The day we headed across to Muriwai (moo-ee-why) beach to check out the Gannett colony, the temperature was in the mid-high 20’s (Celsius) and we were well parched at the end of it. Incidentally, it also is a great place to visit, free as well, and the cacophony of cascading cries from the hatchlings was deafening. It also so smells. If you’ve ever been to a slum with no irrigation, you’ll understand why. Here’s a few gratuitous photos. 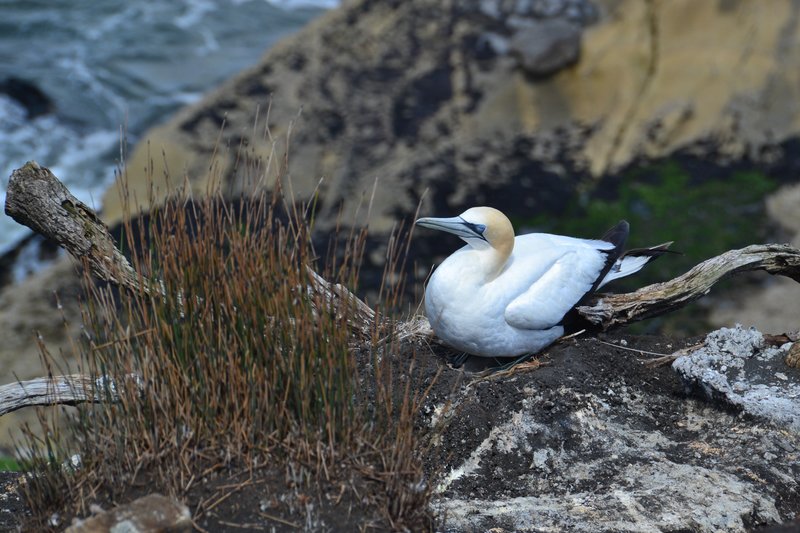 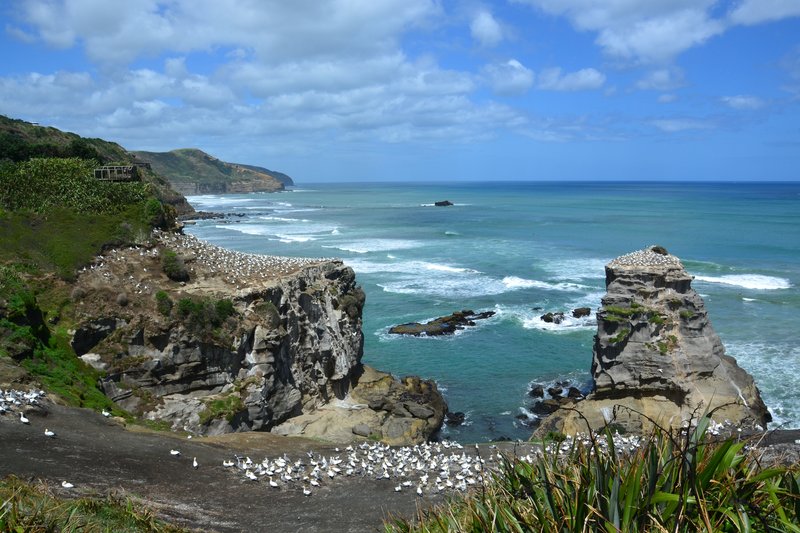 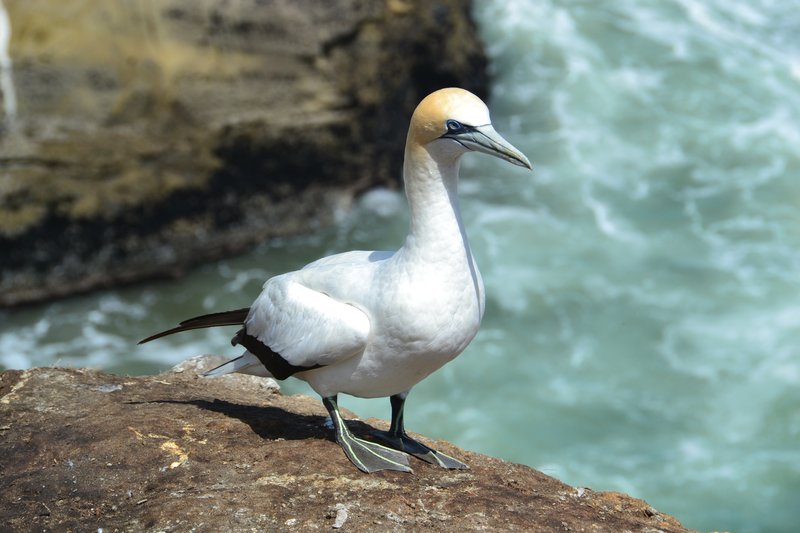 To quench our thirst, we stopped off at another awesome brew house called Sawmill Brewery (saw-mill) in Matakana (mat-a-kaaa-nah). Actually, it may have been on a different day, when we went up the coast to look at views of the water and other such vistas. No mata. Again, another awesome place for good food and even better beer. Check it out. At some stage we went to The Riverhead, probably on Gannett visiting day because it makes more geographical sense and Puhoi Pub, both worth a stop as well.

A few team sports were played in the week or so I was over in Auckland, a pub crawl and attending Meatstock. The pub crawl was a surprise for one of the crew, who was misled into thinking we were heading to the Auckland Museum to attend a symposium on Archival techniques in digital libraries or some such silliness. Drinking beer was a much better option. We went to a few joints all with a fine selection of craft brews on tap, including; Sweat Shop Brew Kitchen, Brothers Beer, Birkenhead Brewing Company and Hallertau Brewery in Riverhead. This is a cracking joint with killer food and drinks, well worth getting any kind of transport you can find, even in the back of someone’s ute with three other people and a spilt drink.
Meatstock was an interesting day as well, kicking around the heaps of stalls (not as many as expected) with amateur backyard bbq afficienados trying to tempt the punters with mouth-watering slow braises and pork treats. This inaugural event has room to improve, but was a solid outing. Even the vegan protesters seemed in high spirits. They were protesting meat and its side effect of animal deaths. It wasn’t a bunch of dudes who dig meat protesting vegans. Which would be an interesting concept.

From a travel guide perspective, driving around the coasts north of Orewa is really pleasant and likewise the stretch of coast north of Muriwai is worth the drive. If the weathers right, there are a heap of places to go swimming and nice areas for nature walks. If you want some free places to hang around with views of the city, try Northhead and Mt Victoria.

Having a local contact when visiting a foreign city makes travelling a much more rewarding experience and even better when done at a slow pace with plenty of time for sleep-ins and hanging out time. Finally, a word of thanks to my hosts Emma and Carl, and their respective families, for allowing me to hang out and enjoy their company. It was a time full of fabulous food, frivolous fun, wondrous walks, scintillating scenery and bountiful beer brews. Both our nations have many commonalities, but what continues to strike me is that New Zealanders seem to be just a bit more relaxed about life in general. They are generally friendlier, still possessing that openness that seems to be disappearing in Australia. I can’t quiet put my finger on it. New Zealand still has a charm that we are beginning to lose. Hopefully, they hold onto it longer than we have.

And if your interested in some of the urban street art pictures from my other blog posts, I have a book of photos available as an e-book. Check it out.

by Dora the explorer

Glad you enjoyed yourself - next time you are here you can try Emma's second choice of culinary delight - stuffing slab!