Hah! Managed to clock up about 35,000 km. Probably should check that my air-vents are not buggered since I got a new battery.........hang on, think that might be someone else's life and troubles with their Cruze. For the record, my vents are dispelling the correct gas mixture, at a healthy temperature following my cruising around the world. Not quite around. Malaysian Airlines, in a what could be an unusual option for them these days, decided to fly directly to Kuala Lumpur and then Melbourne. Apologies if this is a little insensitive to anyone. There was a major dog leg, which probably explains the applause on landing, circumventing a flight path over Syria and Iraq, instead we flew south over Israel, then over Saudia Arabia before exiting the Arabian Peninsula over Oman. Apparently it was a 14hr flight. Having spent more time watching a plethora of Birch trees pass by, it was no big deal.

Malaysia. Bought back some fond memories. Especially when waiting at the departure gate for the next flight. The casual mix of cultures, relaxed atmosphere, bored disinterested security attendants, lack of an apparent system to passing security, it all works in a beautiful, casual, chaotic way. The appearance of numerous sari clothed Indian dadis (not sure if this plural works), who, when your gaze is averted by a squirrel you see out the corner of your eye before realizing that it was just that little bit of scum on your retina that habitually pops up just when you think you've seen the last of him and his microscopic ilk, manoeuver themselves in front of you as if Ganesh himself guided them through the ocean of bodies that many would simply see as a politely functioning cue, instead of an affront to their personal dignity and standing in the world populated by brash youngsters with more time on their side and a miniscule amount of good sense to know what to do with that precious gif compared to these elderly life creators.

Makes me want to go back.

With all trips, it's more about the people you meet. Be they new friends or old family. Again, this was true on this trip. There were some pretty spectacular natural sights. Iceland will be hard to beat. The Mongolian steppes. Austrian countryside out the window en route to Grunau Im Almtal. Crystal clear lakes in Norway. Some cities worked their magic on me as well. Krakow, Reykjavik and I think I started getting London. Cardiff I really liked for some reason. Not sure why. And those little suburbs or haunts that due to repeated visiting, you start to feel an affinity for, often due to the company. Grünerløkka fitted that bill and parts of Berlin. A little pub in Hampstead. Kicking round Munich and Stuttgart for hours searching for hidden treats and talking so much gibberish with Emma.

The four weeks in Cambridge and London were special for a multitude of reasons. Not for general consumption however. That's for me to hold onto.

This whole exercise may well prompt some change in direction. Hopefully. Given me lots to chew on and thanks to everyone who had some wise words for me along the way. You all helped. What and how remains to be seen! Which is the way the best stories begin, with a bit of an unfolding mystery. I may well just keep you posted. Feeling a bit reluctant to finish this up................I already wrote the ending to this post, so will take this opportunity to not say farewell. Instead, hope we catch up soon.

Amongst the many, many awesome nuggets of cool items that I got from my Cambridge five, was some information on Kim Philby. Well, the other good times and gifts were to be honest, more valuable, however, knowledge is never to be scoffed at. So J told me about his story. I did try and think of a way to tie it all together with some link to the Cambridge Five, but what I just wrote was the best I could manage and will not be used as a final, rambling, tenuous thought about my adventures. It will be the penultimate paragraph though, which is a critical one as it can be used in all sorts of ways. A nice lead in is hopefully how this one will have turned out. Not sure which wall I broke by describing how I am using structure in my writing. Definitely already broke the fourth wall. So this could be the fifth?

Things are always better when that old master, Father Time, has worked his relativity magic, the taste of that burger at Jack and Chans in St. Petersburg, the one in Krakow with an entire field of Jalapenos and a block of brie, the label off a bottle of China's finest pressed grape, your face and mine, amongst the many things. So instead of some street treats Melbourne style, I think its only fitting that this post ends on an image of the oft imitated, but never beaten Chuck Taylor All Star. This is my homage to the ad campaign made by you. Sweet street styling of another kind. These kicks are finally worn in. Think I'll keep them! 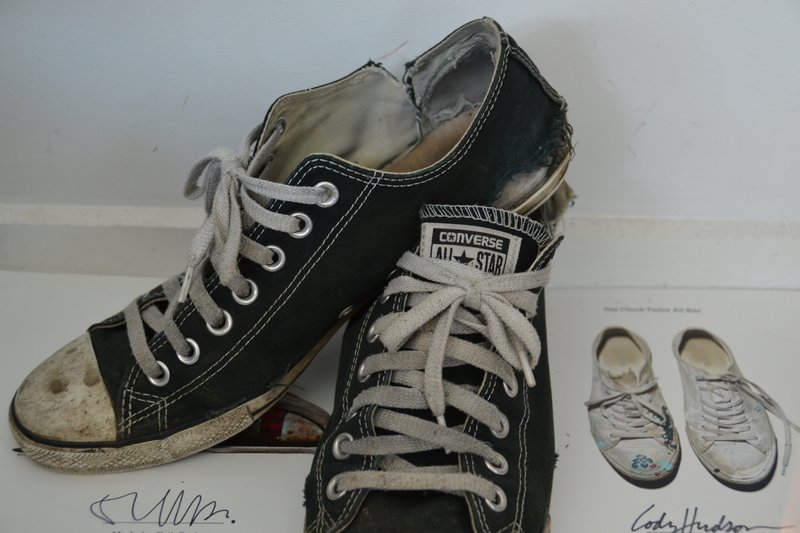 Have immensely enjoyed reading your blogs and feel we have all been armchair travellers along the ride. A modern day troubadour you may be so thank you for the words. They have given us all food for thought.There are paths a plenty awaiting to be trodden. Like Miss J expresses with such exuberance... running, running....funny Daniel...more. I am sure there will be lots more adventures.

by It's not over just kicking on conversely

The four remaining members of the Cambridge collective echo your sentiments, although little madam is solemnly telling everyone that "Daniel in Straylia".

Fantastic to share aspirations and dreams with you, whether over a beer at the Panton Arms, a glass of red at home, a hot milk at Michaelhouse or a flat white from Fitzbilly's.

Best of luck with all that follows in the short/near term...we'll be at the pub in Hampstead this afternoon and will pass on your/our regards,