Credit where credits due.

More for my own reference I have started confirming the name of artists whose work I have seen. So let me just list last entry's authors. In no particular order. The picture with a partial paws of a weasel, which you can't see is by ROA, hope to get another bigger piece next foray into London. On that same photo, I noticed the hands peeling away the white sheet and giving the finger. Pretty sure that is some very old Banksy work. The little guys are from a Polish artist called Noriaki, who is crazy prolific.

The lady with the crazy colourful hair is from Olivier Roubieu. Interestingly all the black swirls in her hair each say London, except one which says 'Mr Shiz' his former pseudonym. I'm learning all these bits of information from various knowledgeable blogs that other people have. The research is pretty fun.

The big lettering is by EINE, Dr. King was by Paul don Smith and I have a few more from him of different people. Seen more work from Space Invader, Alice as mentioned last post. The work from Cardiff and Oslo, and this piece below, is by PHLEGM which also has the full piece from ROA on the left. Hope your enjoying their names! 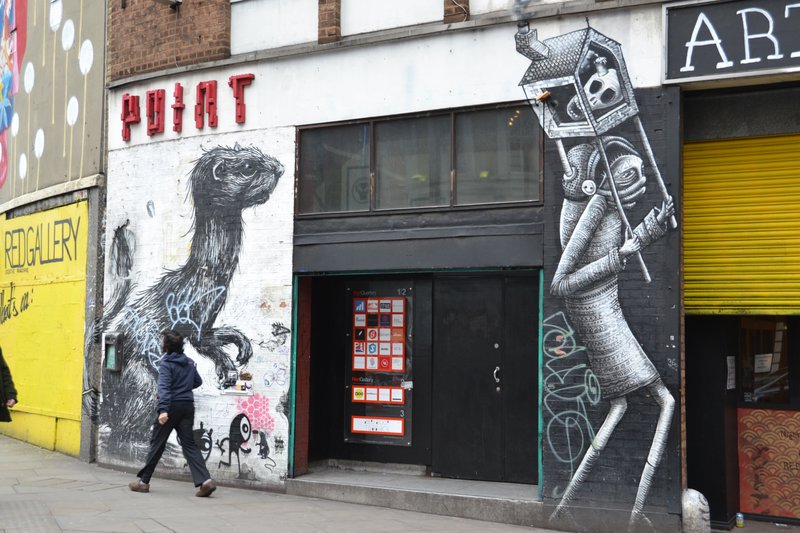 The owl work is by DSCREET, the piece with all the colourful smile monsters is by PEZ. I had taken a few shots of work by Jimmy C, here is one of them. 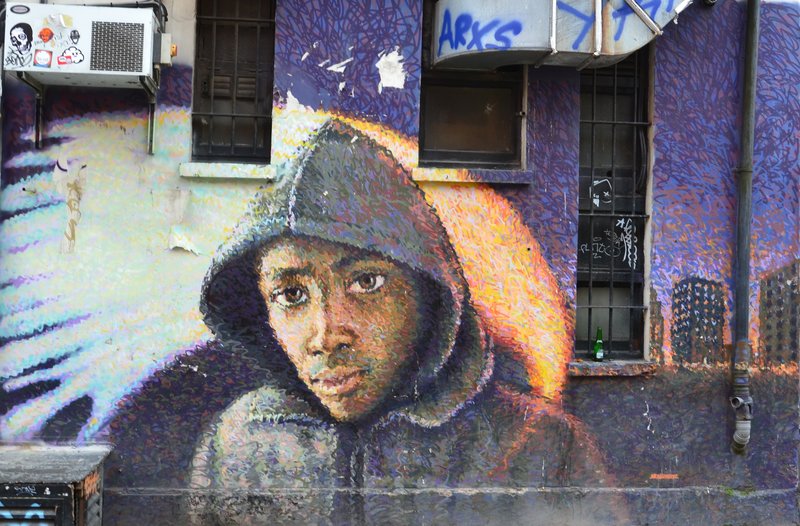 Just thinking that when I get back and make a photobook/ scrapbook thing it will take quite awhile to cross reference all the works and properly attribute the works. So that covers all of last posts featured artists. What about now you ask? Well let us have some new treats. Try this for a start by Mr. Cenz. 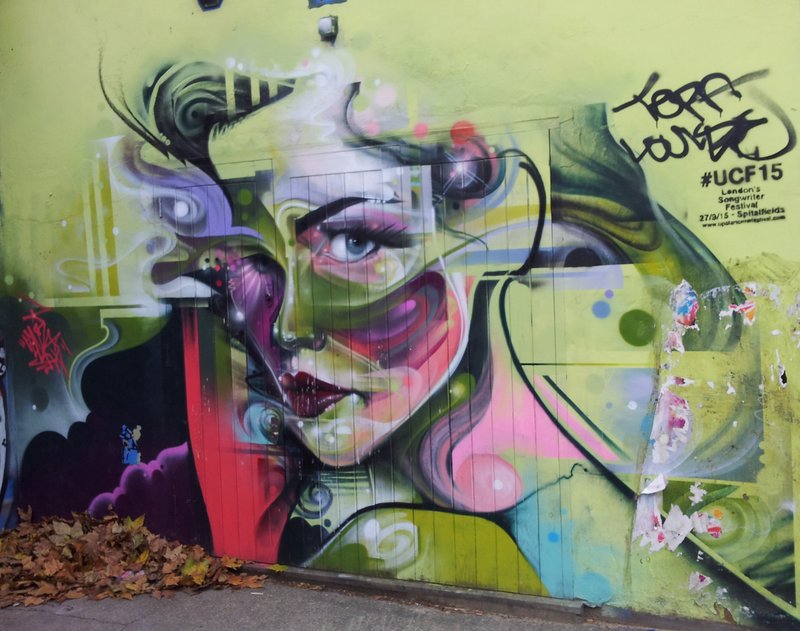 All the mushrooms around the place are done by Christian Nagal.

I'll get back to the props later. Should recount the last week, it has certainly been awhile since I dropped by and rambled. So to get the words flowing, might throw on some Led Zeppelin and Ramble On.

Quite a lot has been happening. The family went on a holiday to Amsterdam and Norway. I have found myself, on more than one occasion, back in the capital. Have been having some epic adventures. Went to a pop-up screening of A Nightmare Before Christmas down near Victoria Station. Was pretty tops, bit of a feed, comfortable chair with blanket and a few warming drinks. We all had headphones on so as not to disturb the neighbourhood, so kinda like a silent disco vibe. They even created fake snow for the exit, so that was certainly a magical way to finish. Managed to travers a fair section of the city, both above and below ground. You kind of realise how all the bits fit together when you walk upstairs. Every thing is closer than initially thought.

Even took a ride on a double decker bus, sitting up at the front of the top deck, from Camden across the Thames to Waterloo station. That was quite cool. Had a pretty massive grin. The destination at Waterloo station was the Leake Street tunnels, bit of a sanctioned graffiti space underneath the train line. A slightly undiscovered gem. Well not really undiscovered. But part of an alternative London tour. If your so inclined. What else in London? Well, eaten some food. And had many a pint of ale. Can't really ask for more!

Actually, managed to go to the Wellcome Collection and due to some serendipitous timing there was an exhibition on Tibetan Buddhism. This was very cool. Bought back some memories of the mountain adventures of India and reminded me how much I'm drawn to that part of the world. Not just the sounds, smells and sights but the deeper spiritualism and cosmic thought that is rooted in one of the most ancient philosophies going around.

During all these going on, also checked into my Christ's College accommodation. Although yet to spend a night there! The College is relatively new, only had its charter granted in 1490. Pretty impressive grounds, like all the Colleges. Charles Darwin is probably the most well known Alumni to have gone there. I was hoping my room would be his old room, but the paying guests are sequestered in the new buildings out the back. That's cool. Might still be able to inhale some spirits when I finally end up sleeping there. Perhaps.

On other related olde tymes, I was honoured to be the guest of J at the Christmas dinning at his college. This was another, in a long list of singularly amazing experiences I've been lucky enough to enjoy this trip. Securing a Dinner Suit, we donned up in our best imitation of 007 and made our way to the College's Masters house. Bit of a soiree, some nice Champagne and intelligent discussions were the pre curser to a five course dinner, with matched wines in the dinning hall. It was just a touch of Hogwarts. The wood panelled room was lit only by the flickering of candles as the sartorial conversational breeze blew around the room. Some very intelligent people were there, as well as me, the continual incubation of progress and world changing pursuits was clearly evident. Pretty crazy.

Hope this hasn't been too boring an entry. Have found it a little difficult recently to write the thought thoughts down. But that's cool. Not for any bad reason, quite the opposite in fact. Been having an absolutely amazing time recently. It's all about the moments. Sometimes they don't need to be expanded upon or analysed. Yeah, gotta totally be like water sometimes. Bruce Lee and by inference all of Eastern thought is generally on the money in that respect!

So that's about as introspective as I'll get this entry.

Nice to drop back in and say g'day to you all, hope everything's peachy. Best to finish on some pictures, so here we go again.

Have a few pieces in this series by Otto Schade aka Osch, who is a Chilean, I really like his work. 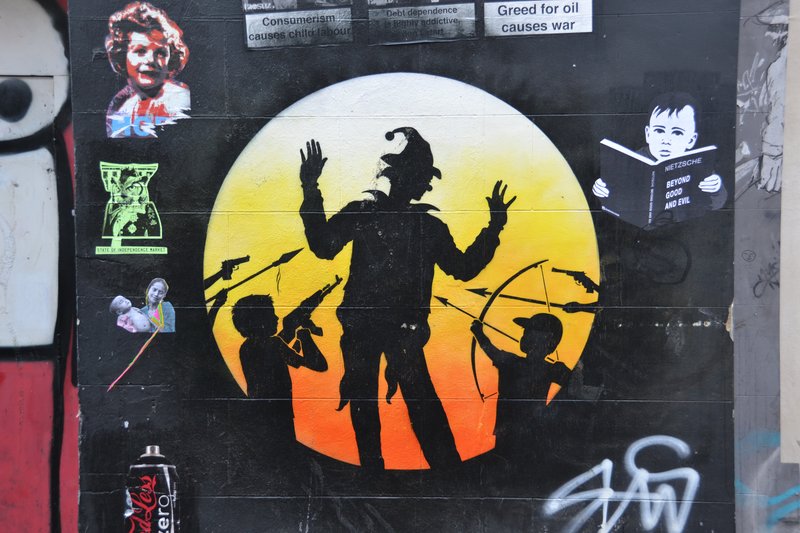 Another piece by PHLEGM, on the walls of the National Theatre, I'm pretty sure. 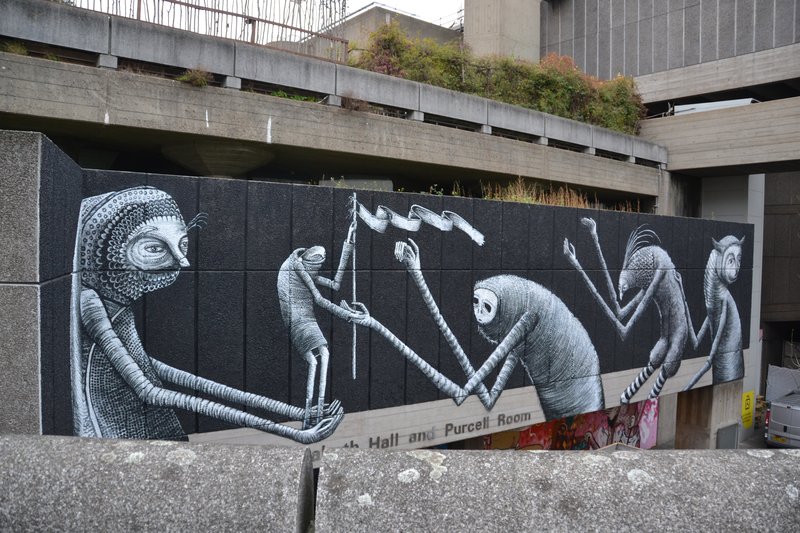 This is really cool work by FANAKAPAN. 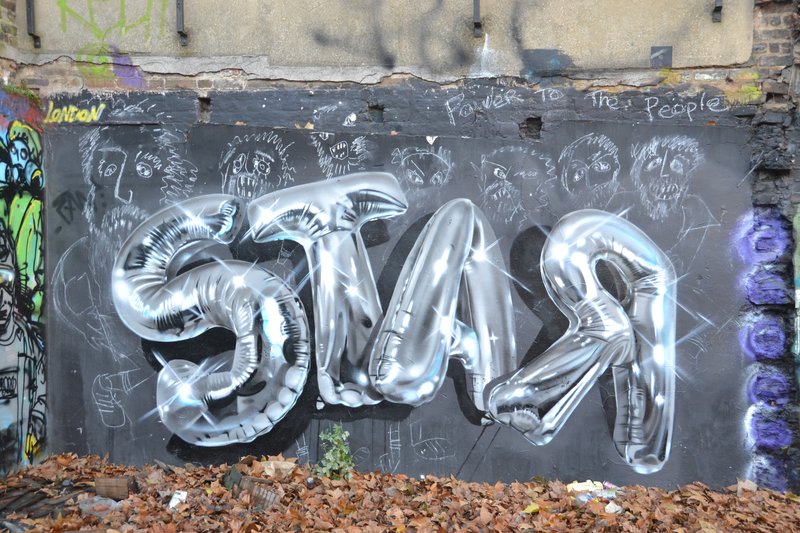 Good to hear from you as wondering if you had gone into hibernation with the birch trees somewhere. Only joking as like reading what you have been up to. Love the art works especially the Jimmy C. Yes I like the idea of the moments too. My favourite sight in Paris was a group of just able to walk toddlers in their highly visible fluro vests all clutching a long rope as they toddled across the road with their child care workers. Made me think of the walking bus for school kids. It was the most priceless thing I saw all day and made me smile. Can just imagine that the dining in would have been a unique experience. Your compilation of street art work will look awesome. Sure to see you soon.

by Just about the moments

I am in Norge and have eaten a lot of yummy food, been to the Dyreparken, explored some forests, built a small city out of duplo and played with wooden frogs which croak when I stroke them. I am having a lot of fun and am being very well looked after by my Norwegian family.

I'm looking forward to seeing you and Nanna soon, and will travel on three planes and two trains to see you before I arrive back in town.

Thanks for your nice letter, which I really liked reading.

PS: Did you know that Buddha is a deity and sits outside in the rain whilst I eat carrots? I saw Buddha whilst I was in a museum in Amsterdam, and told everyone I could find.

by When the levee breaks...