Arrived in Oslo, as the sun was saying goodbye to this side of the world and sliding down the horizons edge. For a second I had forgot I was travelling from Berlin. Iceland already seems so far away, geographically and in terms of adventures since. So too do those Doves I ate in Beijing. They well and truly have been, hopefully, reformed in the infinite matter re- alignment that occurs post existence, and may they not be destined to enter my gut again. Which vaguely leads me onto the first Oslo adventure. A local Prog. outfit was playing at John Dee in the city. So, after a deliscious (may one day check and remember the correct spelling of this blasted word, or continue to lead a one person grammatical resistance army against propa word combinatorial antics) we scooted into town, to said venue, to hear aforementioned band, that I didn't actually specifically mention. I was pretty impressed and remain so, having listened to their soundcloud channel a lot over the last few days. Will add this to the growing Vinyl purchases for when I arrive in sunny Melbourne. Although, it will most likely have to be an online purchase, because I don't quite think there is a reputable musical store that stocks such deliscious sonic treats from such a distant destination as my current locale. Sometimes I think I should just write normal sentences, instead of these overly superfluous, relative conjuctioning pronoun laden, esoteric, interrogatives.

Excuse the digression. The vague link that I was circling around describing occurred as I was blissfully rocking back and forth, awash with electromagnetic wave forms from the harmonic symphony that was been created onstage. The singer, singing in English but doing the audience interludes in Norwegian, uttered perhaps one of my favourite words. Sublimation. Actually 'mental sublimation'. Nice. I love sublimation because it is one of the phase transitions that everyone knows about, but never remembers the name. Its a physical change from a solid to a gas, without a liquid interphase, of a single element. Cool stuff. Also, it got me thinking the other night about my favourite acid. Solid trichloroacetic acid is ace. Because it has a slight sweetness to it and is kinda like sugar. It also burns yours skin and discolours your gloves when you hold it, or spill it on yourself like I sometimes deliberately do because it tickles your skin as it eats away your epidermis like a psychotic mosquito bite. Love it.

Good first night. The weekend was tops as well. We went on a number of walks, got shown around, so now I am armed with a mental map of how and where to go during the week on day adventures. We had some unseansonably delightful weather as well. Cut to Monday, as I'm writing this. It snowed this morning as I was cocooned under my warm blanky. Was quite cold outside, and wet and slushy as it was still a bit rainy. But I went out for a short walk around the apartment complex area. Have yet to gain my snow feet. Slipping and sliding around like a new born giraffe. All legs at the moment. But hopefully I will get a little more confident and will soon be munching on those low hanging leaves. Have been a little bit lazy, because, funnily enough, it's nicer to be warm than cold and wet. But will kick around Oslo and have a list of some good little areas to hunt for visual treasures. Here is a pretty representative photo from the Saturday we went walking down alongside the Akerselva. Actually I may have lightened the shadows a tiny bit to improve the building detail 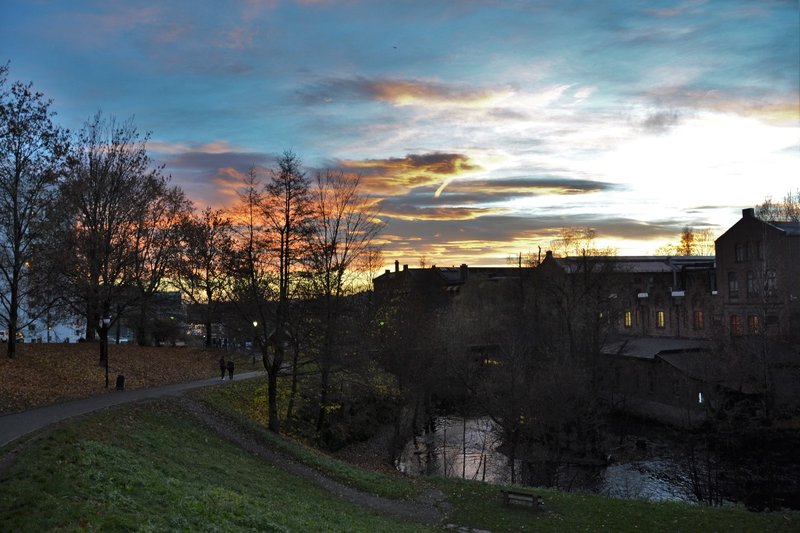 Received some pretty rad news about next May, so am stoked about next year. Totally unrelated to anything, just thought I would throw that in there.

Okay, so today I have been boosting around Oslo. Thanks to some tips from my hosts, and a pertinent blog post that I managed to locate, describing all things urban related, have hit upon some delightful street candy. This time I may actually be a little light on the wordy words, let the words on the street speak for themselves. Will lay down some street truths though. Underpasses remain a great place for out of the way expressions of societal distaste. Long may they remain a cities underbelly. Both, in terms of not been to intrusive on the delicate sensibilities of residents and also, remain, hopefully, away from the constabulary, who surely have better crimes to persecute than, at times, wilful childish behaviour.

Wow, so I'm kicking back in a burger joint, with free internet and I kidd you not, another Belle and Sebastian track has just come on the stereo system. Give me a moment to bliss out again Mrs. Fryer, as I did in Cardiff, under strangely similar circumstance. Man, sometimes I feel like I'm in a recurring waking dream. Could actually be the pinnacle of existence. Relieving energy states. Reminds me of my thesis I articulated to myself in India nigh on 10yrs ago. Will be back, better eat my sweet as burglar!! Chock full of jalapenos (hah, actually spelt that with an aitch on my first attempt). Damm fine.

Here is my Indian digression. Having secured a tent from a local mountain chi shop owner on the peaks above the Dalai Lamas residence in exile, Dharamsala, and too be clear a little of the Hindu hash, I spent a night up on the glorious foothills of the Himalayas, by foothills these were 4000 odd feet high. More like kneehills. Shortly after setting up my digs, a local goatherd, child wrapped onto her like a conjoined twin, made her way down the hill and stopped in front of me. We shared some of my biscuits. She sang a haunting melody and about 15 minutes later, her herd slowly picked their way down the craggy mountain scape. One of those moments where I resisted taking a photo, as this was to be my memory alone and I felt that would besmirch the scene in my minds eye.

My contention, after that night, spent reading Desolation Angels, by Kerouac, formed in part due to my proximity to the inception point of Buddhism, was that reincarnation is, for me, not a literal rebirth of the same soul, but rather a recurrence of distinct 'energy moments'. Probably helps if you smoke the hashish at this point. This slight diversion down memory lane was all in the hope of articulation of my elation at this small moment I'm experiencing. Having quickly scanned through some of todays photos, something just caught my eye that I hadn't noticed at the time. This photo, below, has an odd little recurrence and could possibly capture an overarching theme from this journey. It brings together a few things. Damm, music is killer here. Had Tangled Up In Blue, now Easy Like Sunday Morning, almost a hashtag silent tear moment Emma! This photo, on closer inspection, has a poster on the wall of the scene, for Delicatessen. So, links essentially all the conversations Emma and I had over those months, all the pork meals and porcine adventures that ensued. The guy in Eraserhead, I had similar hair at one stage in my life. Anyway, I got a bit excited about that. 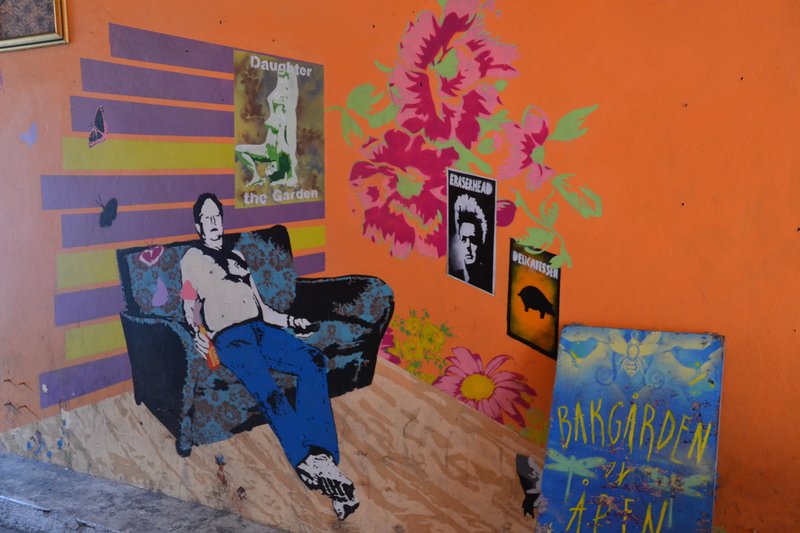 Onto some more photos. Have seen heaps of Alice's work here. You may remember her from Berlin. She is an Italian lady and most of her works feature her friends daughter. Good stuff, they are quite clean over here which is nice. The Berlin crew 1UP also has popped up here a bit as well. Sweet action. I also believe this last piece is from an artist that I saw in Cardiff.

Enjoy the treats for your consumption. Might shuffle off, not this mortal coil, but rather back to Shani and Bengt's. Another sweet day. 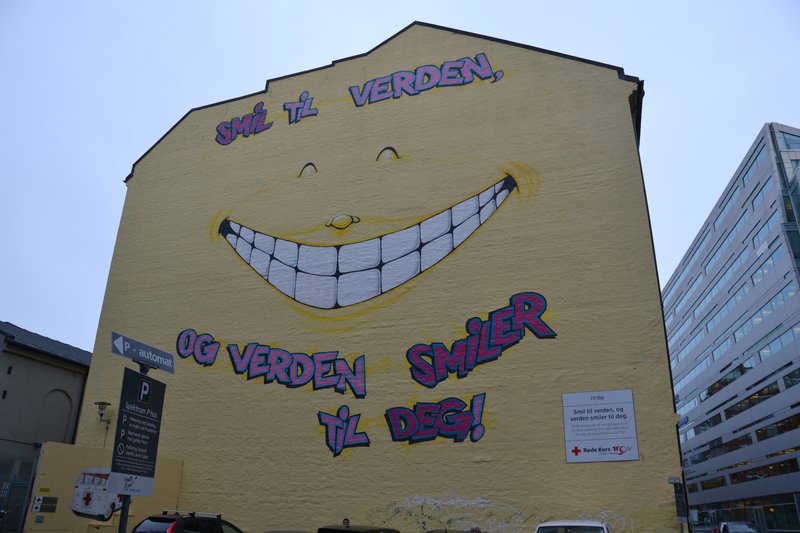 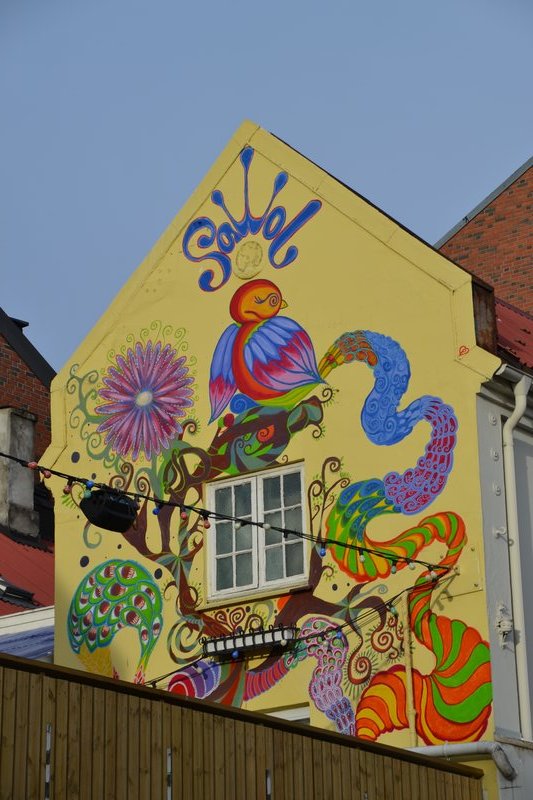 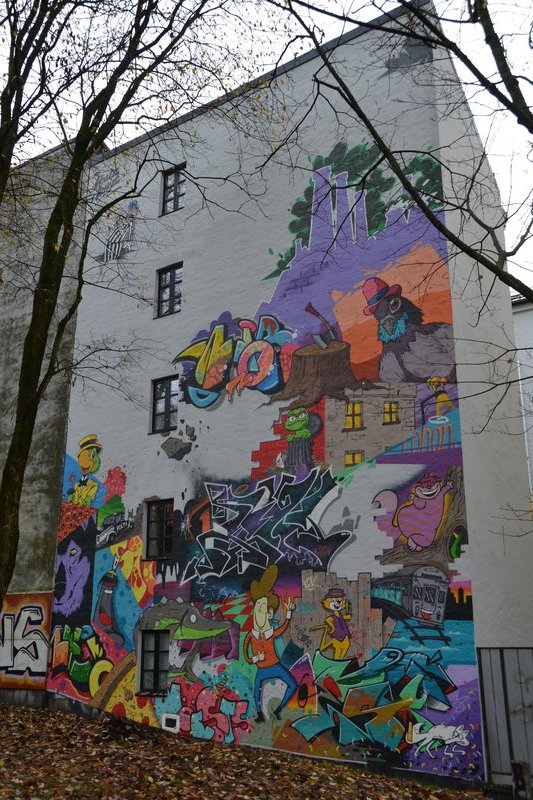 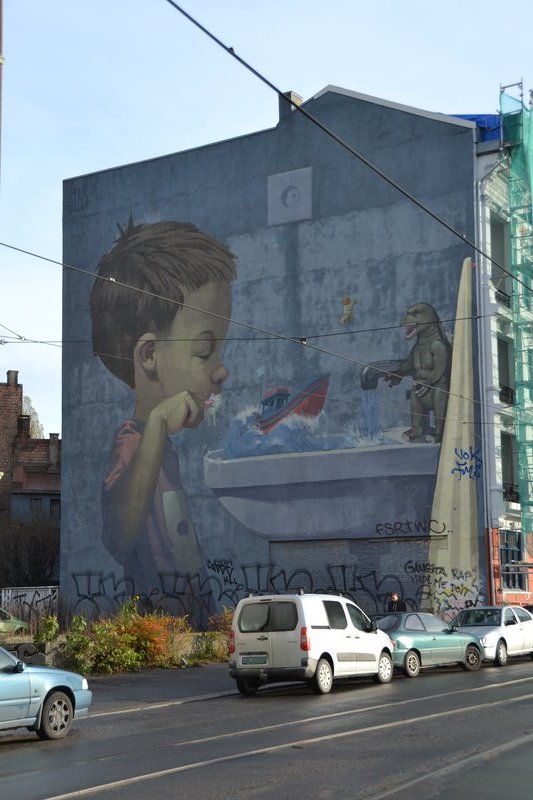 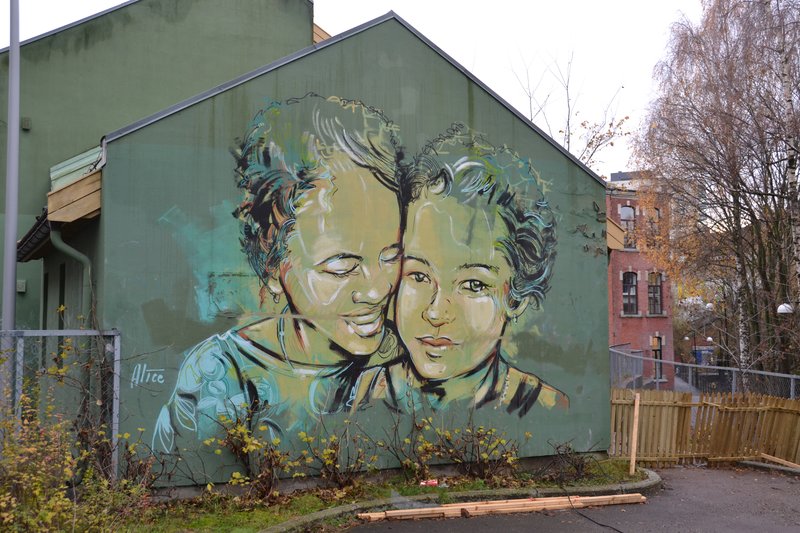 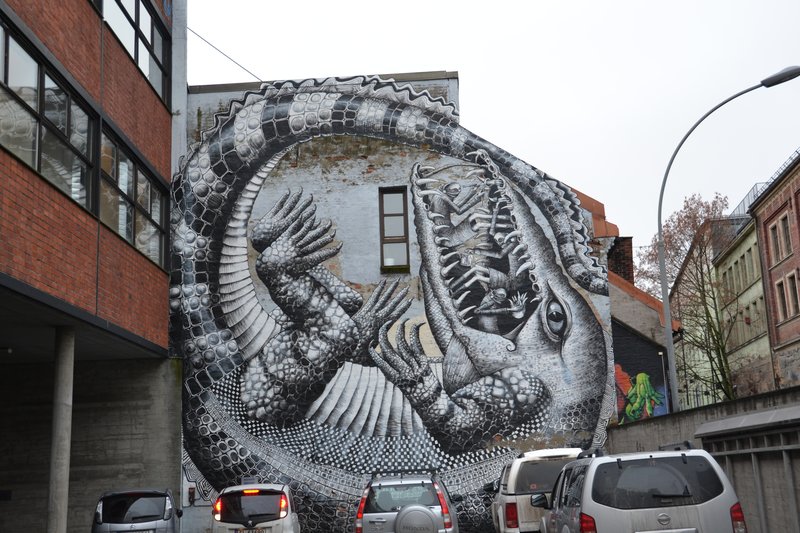 Hi mum! You must be getting thrilled as its not long to your adventures. Oh, and some more sweet news, not due back at work till January 4th. Time for a possible pit stop across the Te Tai-o-Rehua if I get a little carried away with flight related detours. Okay, you twisted my arm, I will save the 7 piece Alice series, but here is some more of her work. Another random one and lets finish on some positivity in wake of the horrible news from this week, not just from the baguette capital, it was truly a depressing week for the advancement of humanity. 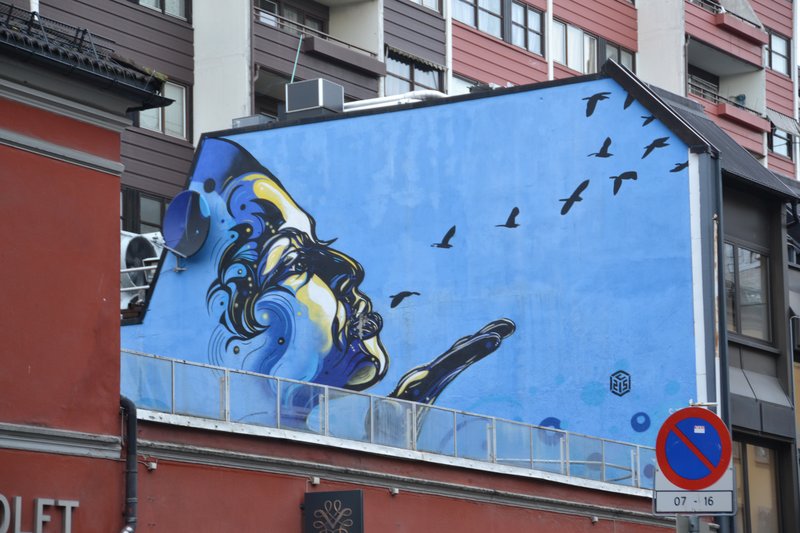 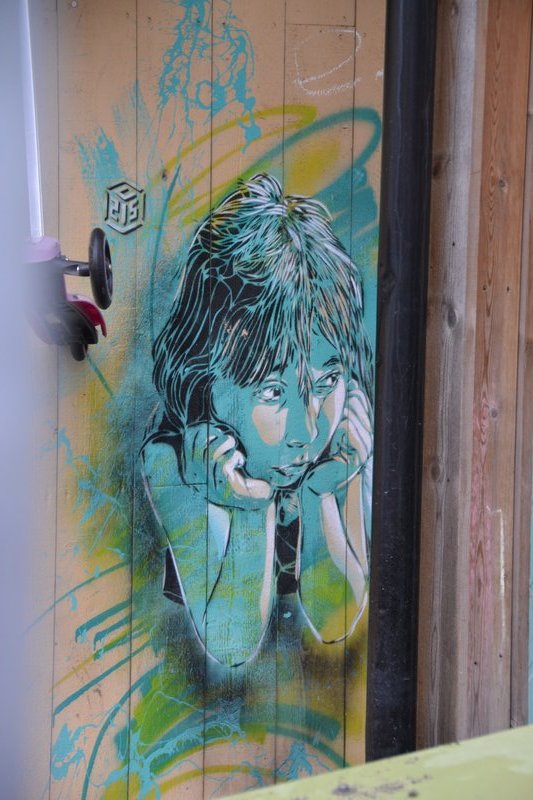 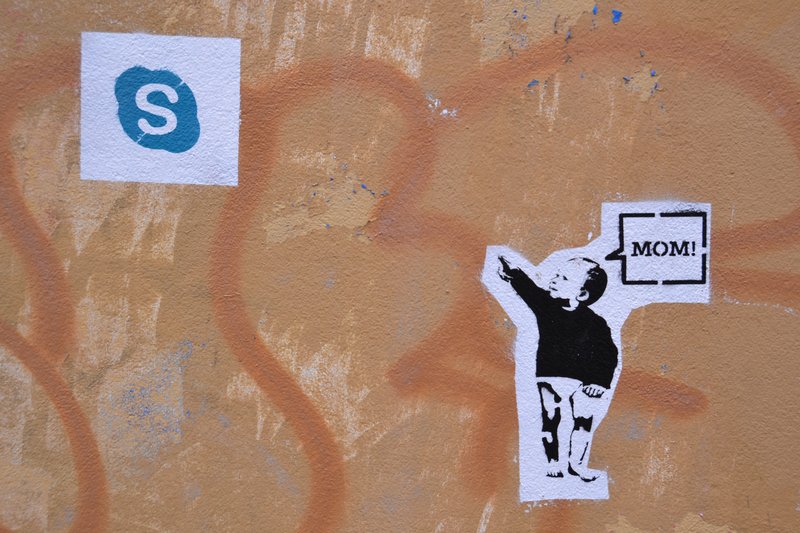 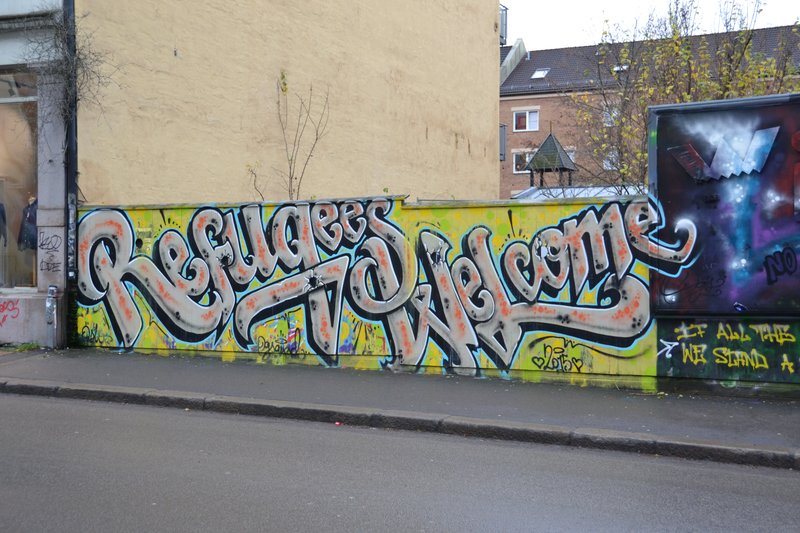 Hello Daniel.Love the colours in some of these works. I really like the little latch key girl on the door work too. Looking forward to seeing you at the dairy and that would be great if you could manage a stop over in NZ. You will be exhausted once you get back to work but that will give you heaps of excuses to spill things on your lab coat.... Just joking. You could even break out in the different goat calls.

Hi Daniel, Great to read all your blogs, very entertaining, even the esoteric....to me.....Just love the street art... Continue to have special moments.Love Ro