Flying into Keflavik airport was easily one of the most amazing spine tingling experiences of my life. For a brief 15mins I was nothing but synaptic energy bursts. Truly a straight up, ethereal, otherworldy cool landscape. It was also bizarre because I was finally reading the rest of my Juxtapoz magazine that I have been carrying around with, in the off chance that I sit next to some amazing women and can look really cool just chilling and reading about Banksy and other cool cats. Totally contrived casualness. So this particular issue has a section on a dude called Turf One and he was describing some of his influences, a major one been the fantastic movies by Caro and Jeunet, especially Delicatessen which also happens to be a favourite of mine. This is where things, in the way that the universe seems to display that chaotic non linear time linkage craziness, get weirder. Emma and I had been having on and off conversations about things we really dig, including my love of this movie and the entire time I was carrying around reference to it. I don't know, seemed like an odd co inky dink. And, it also has a photo of Turf One holding a pigs head over his face. The porcine connection is back. Felt like one of those odd moments. May also have been the chills from a 5 degree arrival temperature. I felt like I had arrived in a place unlike any other. This post will be written more like a straight diary, so if I get a bit introspective it's because I no longer have an Emma to listen to my 'sound and fury'. That was a straight reference at stream of conscious writing. Or sometimes I like to think 'unconscious crap' in my case.

Another reference then. If Slartibartfast won an award for his Baroque addition of Fjords to Norways coastline, then I sure hope whoever designed Iceland got some recognition as well, because it be truly beautiful. Just re reading this, might start taking a Dictaphone around and start talking to it, 'Emma, had a dam fine cup of coffee and cherry pie today'. That will be the last cultural reference for the moment. Maybe.

So this morning, I awoke after one of the most comfortable sleeps under a doona in my life. So toasty. Headed out to get a beanie because it's cold. I mean, the last time I was this cold was when I went on a survival camp with scouts, in Mt. Buggery or some silly named mountain, I mean there are a few in the Alpine National Park, should have been Mt. Freezing Cold When All You Have Is a Rubbish Bag To Sleep In. Guess I survived it. So, it's a bit chilly. Well nothing that 5 layers of clothing can't keep out. Job done, I strolled down one of the main streets in Downtown Reykjavik. Saw a stack of street art. So you may well get multiple postings from me whilst I'm up near the top of the world. Oh, just remembered. Last night, had a look out my window, and bam, the Northern Lights decided to pay a visit. Crazy. Superlative superlatives would not be able to describe that moment. I headed down to the bay, it was pretty cold. Probably need a few more adjectives to describe the level of cold, but, for real this was bonkers. Laid on my back on a volcanic black rock that is the predominate terra form up here, and just blissed out. Actually had a tear roll down my cheek, which promptly crystalized. You could make some pretty cool potion out of that tear, because it contained a heady cocktail of emotion. All kinds of fun times for sure.

Checked into the festival today, now my wrist is sporting two tokens of musical goodness. Still rocking the ProgPower band. Going to try and pace myself with the sites and sounds of Reykjavik. Am back at the biscuit factory about to listen to a Reykjavik band East of my Youth. They were great, the singer had a divine voice. I have a stack of photos already, so will probably post quite a few. This place is epic, for sure. Need to do some research and listen to bands I want go see, that's it for now. More to follow no doubt!!. Also a picture of Harpa at night. 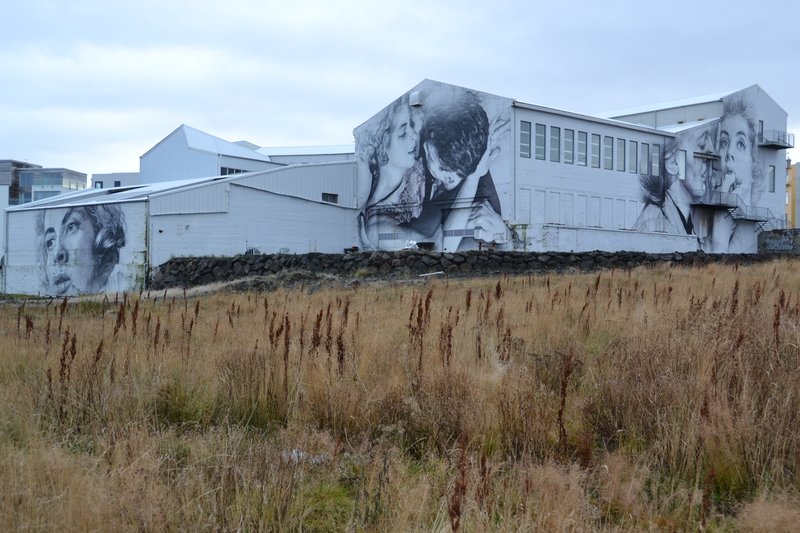 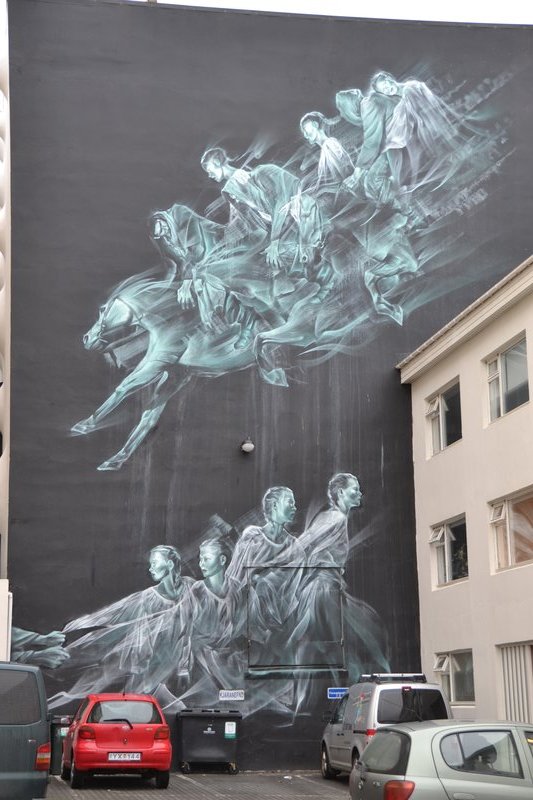 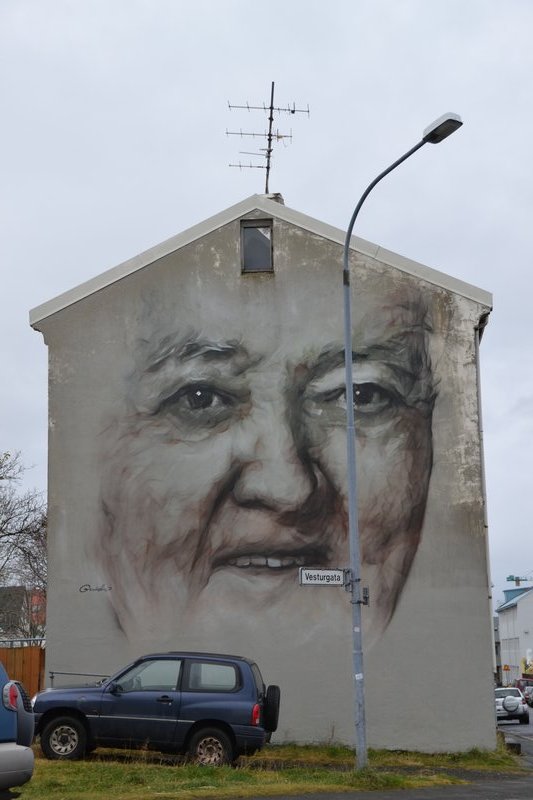 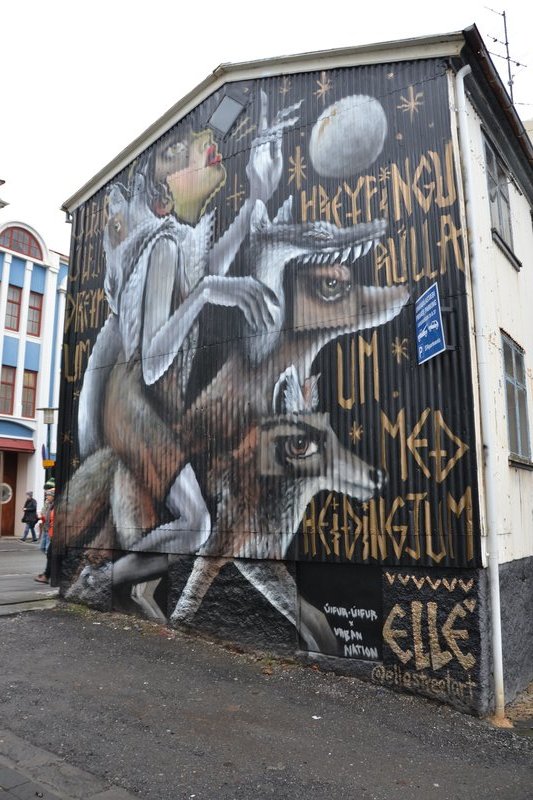 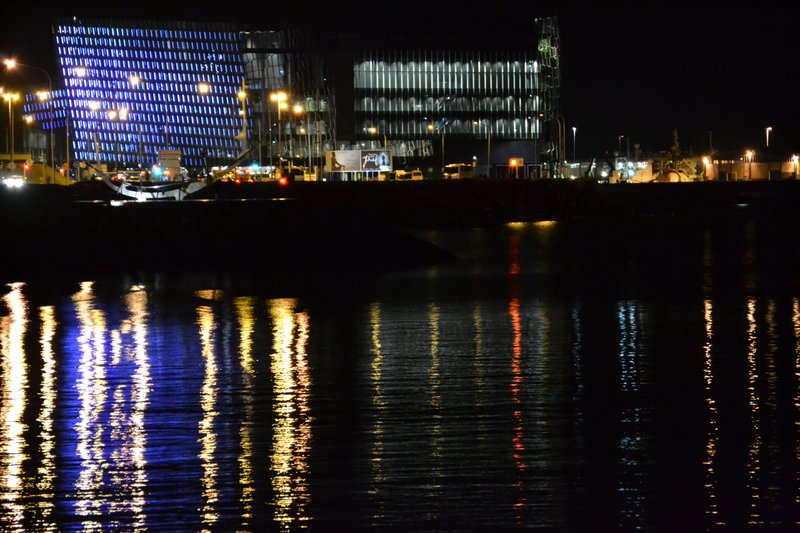 Can you post your #silentrocktear plus a strand of your "rouge side burn hair" I can then mix this together and conjure up a magic potion that will transport me coffee in hand to your Biscuit digs for the most epic dunkie biscuit road trip?

How spectacularly lucky are you. Just spoke to 2 of my young work colleagues who have travelled yonder way and they have never seen the northern lights. What splendid luck you have been bestowed. Love the street art too and those photos would like amazing in a coffee /tea table top book...the hipsters would love it ...even oldies too I reckon. You have the market covered and another profession to consider.

by Northern lights! Lucky you