So I might be a little behind now, better throw some stories down whilst the memories are fresh. I arrived in my Stuttgart Hostel after a leisurely 15 minute stroll through the arts precinct, to find a very cool little hostel awaited. Super comfy couch, which I promptly crashed out on after enjoying the 2hr train trip. I think so far the best train scenery, after those glorious Birch trees that seemed to stretch on for 1/3 of the worlds surface in Siberia, would have to be the Austrian country side. The trips from Vienna- Grunnau and then into Germany were awesome. Rolling, lush, bovine filled meadows, with a dramatic backdrop of perilously steep snow capped mountains, all with a sullen layer of fog that refused to lift from the low lying fields was pretty fantastic. The changing colour of the trees also added a certain je ne sais quoi to the proceedings. Beautiful.

Stuttgart was a pretty cool little town. Vineyards were about a 20min train ride away, always visible on the hillsides surrounding the town, a huge amount of parklands, which we did our best to walk through all of them, a lot of cultural institutes, it seemed to be a pretty good place to live. We smashed out a huge walk on the second day through some of the parklands, all the way down to the next suburb across the river, called Bad Canstatt. Why? I hear someone ask. So we could cruise around "The Hall of Fame" underneath the overpass over the river. This is another site of graffiti, that has evolved over time to be a sort of permanent gallery. The quality was not as good as in Munich, or Camden, however more of a reflection of street arts origins. So some pretty good lettering styles, but if your into the mural side of things not so good. Again I did a little dance, because hitting these sites has been fun. I mean, travelling all away around the world finding graffiti/ street art is pretty cool.

Following on from this site, we decided to check out the Schweine Museum. Right, I'm a fan of our porcine cousins, they're tasty, provide a good human analogue for research in some circumstances, pretty good at sniffing out truffles, make cute pets when they measure the size of a teacup and have delicious knuckles. (Side note, sitting in Cardiff hostel, early morning, and Belle + Sebastian's 'Boy with the Arab strap" is playing........so just going to bliss out for a second). Back to this museum. It was crazy, like a man/women had been collecting anything pig related for 20yrs, then either the wife or the husband laid down an ultimatum. Me or the collection. So, correctly, they chose the pig collection, turned it into a borderline psychotic homage to the tasty trotter. When the museum then became successful, the discarded spouse came back to reunite the couples relationship and boom, together they now manage a museum with over 50,000 single items of pig paraphernalia. Complete with an adjoining restaurant, showcasing the masticating delights of the flavoured Porkys. Seriously, they even had a section to the Erotic Pig. Which was quite disturbing. Weird, thankfully my dreams were normal.

In a nutshell, that was Stuttgart. Apart from wondering around, looking at cool clothes to by, and getting very confused with what 30% off means, we smashed it out. Also made some pretty awesome meals, Emma didn't burn herself cooking which is quite the momentous achievement and I ate a lot of pasta. About 1/2kg. Come to think of it, I ate the rest of Emma's mash potato last night, which was about 3kgs worth of mash, man last nights meal was rad. We rolled into Cardiff, found a traditional pub and had Cawl for a starter. Which was like a fatty stew, with a slab of cheddar and good bread. Then Pork sausages with mash and peas. Good god it was friggin the bomb. Clearly those Anglo-Saxon genes are speaking to us.

Anywhos, might continue with our stop to London. We flew into Gatwick Airport, then caught the tube to our respective hostels. The plan was to meet at mine, near London Bridge and then head onto the Trafalgar Sq. fanzone. Emma got a bit lost. Which was just as well, because we had no time to reach TS so setup camp at the sports bar downstairs. Massive game. Thankfully the All Black's prevailed. We ended up having an early night, a combination of time traveling catching up with us from Stuttgart, early afternoon drinks catching up with me and the fact that it was pretty dark at 6:30. Incidentally, it is pretty much night time here in Cardiff at 7pm. I can only assume it will be earlier in Iceland and Norway. Not long to Iceland by the way. Plenty still to look forward to and this sojourn is not even halfway over!! So, the next day we hit Camden Markets. The maze of shops was crazy. It went on forever, located Cereal Killer Café, which will be a must see destination on our return. Then it was back to the Hostel pub in Camden for the second game. Colour me not surprised. Another corker of a match. It seems that the inevitable inertia that has been building around this RWC has eventuated and now the final that had to be, will be. Not sure where I stand on the outcome. That part of the human psyche that sees patterns/ faces in nature where there are none, for me, views the outcome of this match with added symbolism. Ladies and Gentleman, it may determine the very future of my life. Who will win?, where will I live?, the twin questions have been circulating around each other like a binary star system in a death spiral, a collision will occur, it has to, and a decision will be reached, lets be honest it probably already has and I havn't realised it. Luckily we didn't end up at the fanzone in Trafalgar Sq. as neither games were been shown there. We can only assume that it is out of spite that only the final will be been shown, why else would you have a giant screen in a public place with beer stalls and associated goodies and not show either semi-final?

Back to Camden. Managed to snap a few nice street-art sites just off the main drag. It pays to walk around the odd corner. Also saw the obligatory John Lennon mural. All these I caught on my phone, so when we head back I will take the camera and get some more stuff from down by the canal. Anyway, snapped up some good stuff in Camden, so as a treat for those without FB I'll include them. Mum, I think you should definitely cruise around Cardiff when you have some time after Christmas, think you'd like it. People are crazy friendly over here. Especially people asking for spare change, super polite. I imagine if we get held up at knife point and stabbed our assailant would drive us to hospital and call our mum's to inform them that he/she has just robbed us and stabbed us in the kidneys, but don't worry we are now safe in hospital. He/she would probably be kind enough not to take our credit/ debit cards, because that is a super hassle to sort out replacements. Cardiff, just brilliant. Good food as well. Nice craft beers and plenty of walking to be done.

So that might bring us back up to date. Few other adventures were had. I bought some more clothes and now have decided to get a wheel based travel case to use as a carry on bag so I can cram heaps of clothes in it. Also created what I think is a new word, "meonderings"; a combination of meandering and wondering to describe what we have been doing most days. Emma seems to think that meandering is essentially the same thing. I don't know, meonderings, see totally awesome word. Ty it out, see how it rolls. Your welcome! Bought a Poppy as well. Had a good conversation with my brother as well, always nice to hear a familiar voice and eagerly awaiting our impending reunion.

First two photos are from the Stuttgart Hall of Fame, the other three are from around Cardiff.

So, cael diwrnod da, think that is legitimate?! 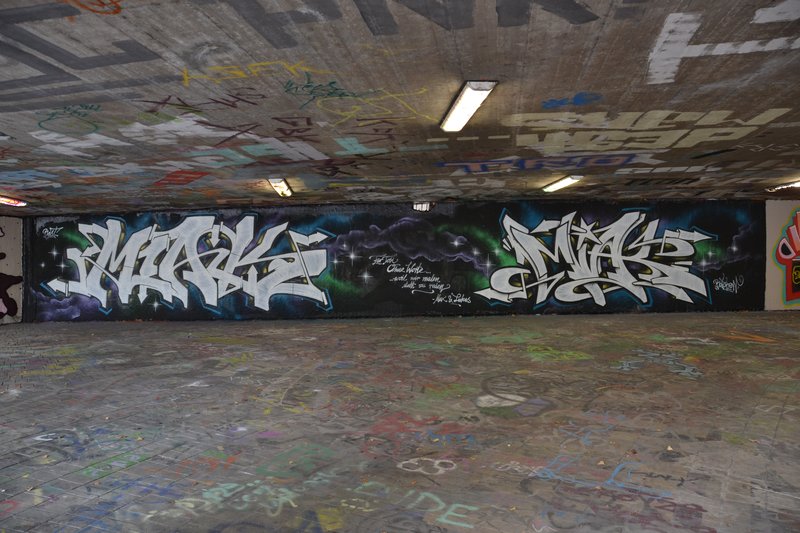 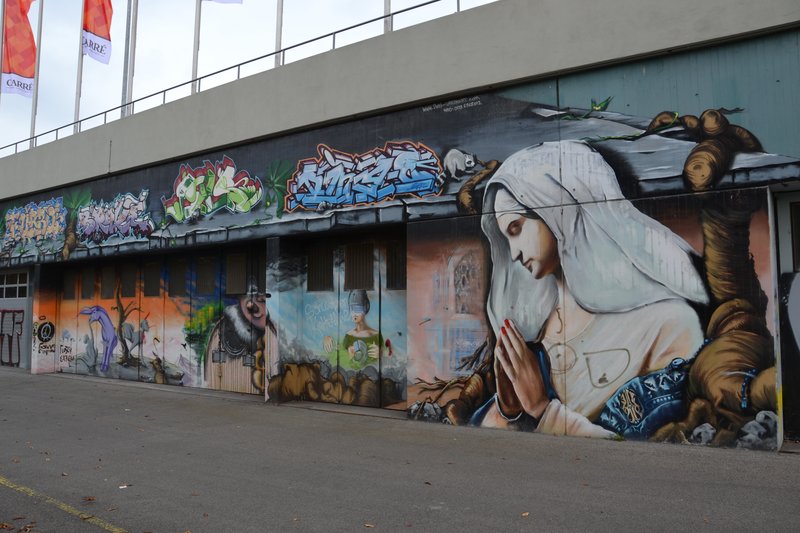 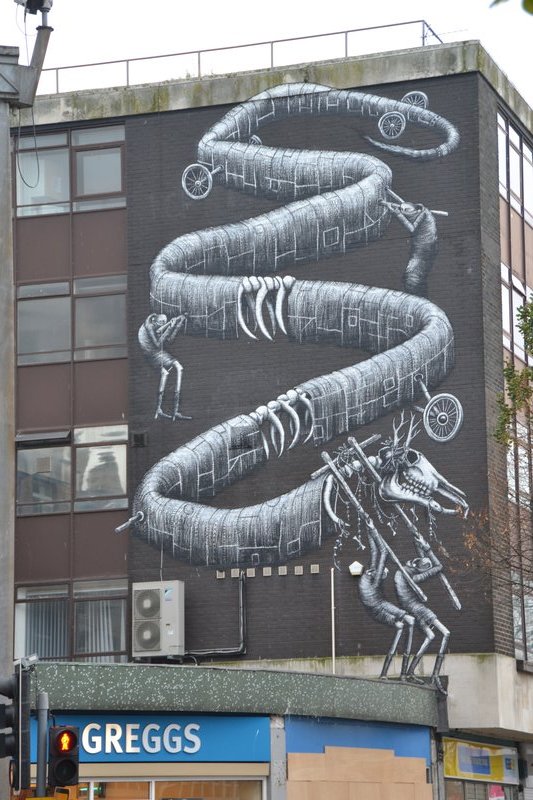 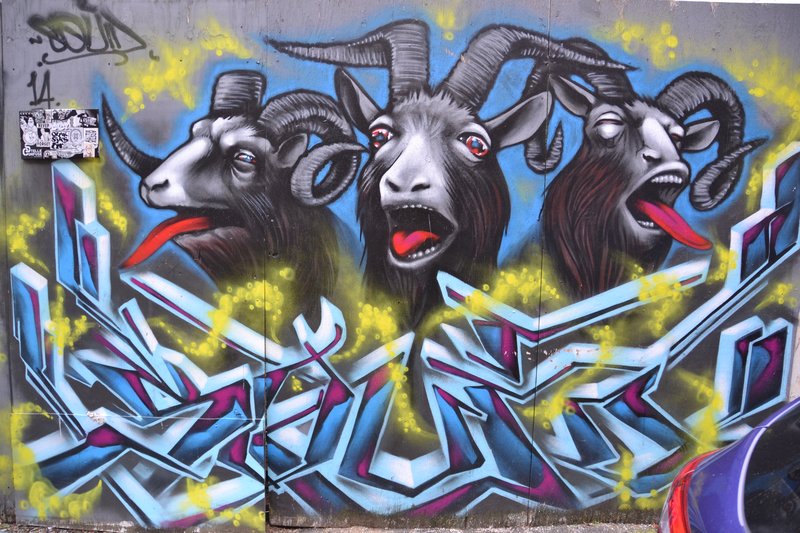 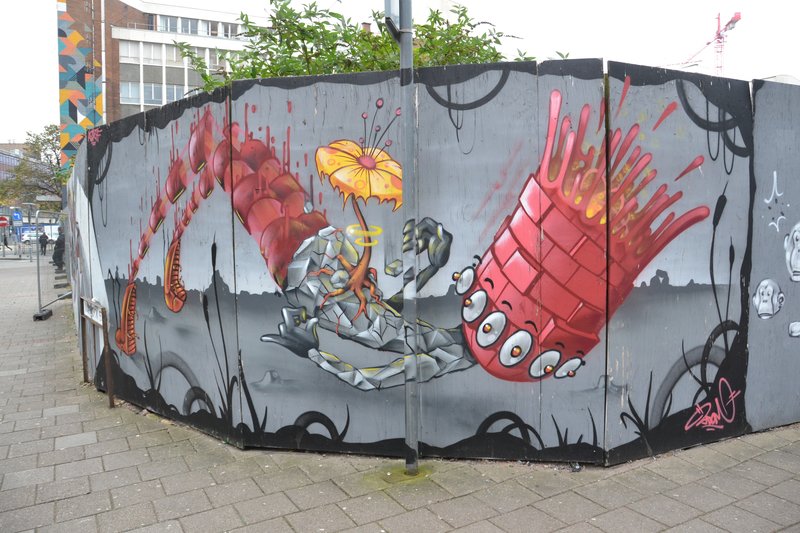 Cool blog Daniel and very funny and witty and informative. Love the meonderings and if we all use that word it might make the dictionary one day. Pigs and porky delights have taken your fancy. You might have been a little piglet in a previous life and not just a kid. Love your photos and street art certainly has a place. Everyone here is also gearing up for a very early morning viewing of the World Cup on Saturday so it must be quite exciting to be an Aussie and an honorary NZ overseas at this time. Cardiff sounds very friendly indeed. Keep enjoying and musing and you might come up with a new profession whilst you are at. Maybe a wandering meondering mystic or something normal like that. Cheers big ears

by Hope you don't grow trotters