This is all a little crazy. Two posts in a single week. Thought I would continue rambling on, about stuff you know. Quick update on my loose plans. The only confirmed date and destination is Iceland on the 3rd. Havn't sorted out a ticket because not entirely sure about where I will be. Also confirmed is me arriving in London on the 24th October, but that weekend will be dedicated to two big RWC games, probably hanging out in the Fanzones in Trafalgar Square. Or a pub. Essentially anywhere with a giant TV and the elixir of the gods. Depending on the outcome of these games, the next move(s) will be decided. Also, my erstwhile travelling companion will be cutting away for family time when I head to Iceland. Will also squeeze in Berlin either before or after Iceland. Not sure!! Sorry, please don't hold off on your own plans J, I have confirmed accommodation in Cambridge in December, so will be able to do some revision of my own numeracy with the budding mathematician. Now that I think about it, I know it's super cold but I hear Scotland has a 'Right to roam' law or some remnant of antiquity that allows you to camp wherever you want and have fires. Hmm, might have to investigate this for December and get lost in the Scottish Highlands.

Again, we absolutely killed it in Munich. Second day in, we did our own free walking tour with the mission of finding some quality street art sights. Managed to complete this mission, and also kicked around in a giant loop of walking and through a combination of dumb luck and skilful vague ideas of directions hit all the cool joints that interest people. My highlight was finding the tunnel underneath the Angel of Peace statue. It was rad, I may have done a little dance. Yeah, I totally let the beat take over. We only have an appreciation for the outside of buildings. Having been spoilt for amazing internal delights of both architectural subliminity and sumptuous ephemera at the Hermitage and the Kremlin Museums, we are content with admiring the macro forms and scintillating detailed appendages of Gothic gargoyles that adorn the Castles and Churches we've come across since. You get the idea. Also saves money.

When we headed out to Neuschwanstein Castle, the sun rose early and made a solid start at burning away the early morning fog that shrouds these parts for almost the entire day. Clearly, we have been pleasing whichever god is responsible for carting the sun across the sky in his chariot, because he has been stoking that firey ball of flame well. And props to Thor for occupying himself on the days when we decide to have adventures outside of the cities. Whether it's a cycle along the Danube, or picnic on the lake at Neuschwanstein, we have had the clearest, warmest, unusually brilliant weather in an otherwise bleak, cold, wet and misty month. We only spent 15Euro on our return ticket, and just kicked around in the glorious outdoors for a few hours. Boom. Sorted. Smashed the photos as well. Having learnt how to blitz a supermarket for lunchtime goodies, and of course listening to the echoes of our mothers and purchasing healthy options, we have graduated to top of the Vodkatrain Class when it comes to value for money and gourmet deliscousness. Again, the little things in the life of a traveller. We splurged the other night when we bought a faintly musty, sub-par bottle of vino at the local Lidl supermarket, spent 3Euro. Crazy kids. I think we should have spent only 2.50 and got the bottle from Straya, m8!

It's a quick 2hour trip to Stuttgart, another pin in the cushion of Europe cities. Hope to check out another street art sight, underneath a train station. Hope it's cool. Also, I think we might fork out the cash moneys and hit the Porsche Museum. And it looks like there's some pretty massive parks to wander. I'm going to post a 5 panel piece from Munich. It's sweet. Maybe a photo of the lake at the castle. Just search for actual images of the castle, if you want to see what it looked like. Oh, and a shot of a gargoyle at some church in Mariensplatz, or somewhere in mainstreet Munich. I mean I presume it's a church. Could just be a big building to hold up a small clock. 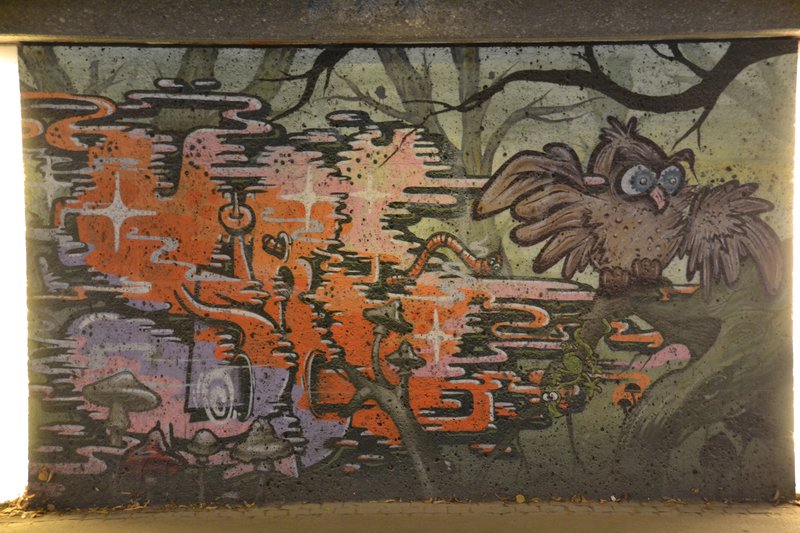 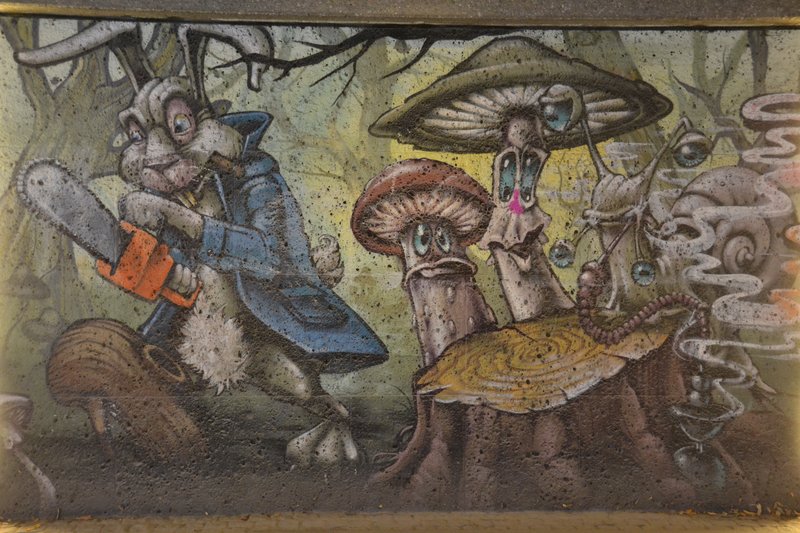 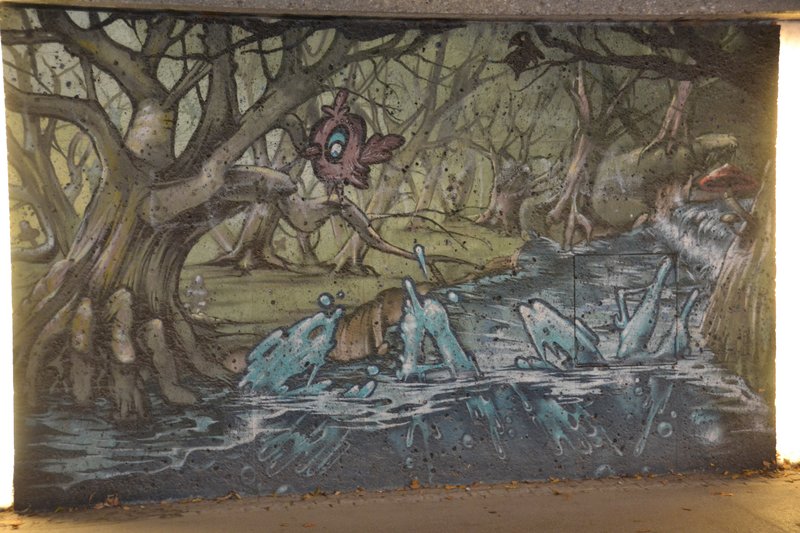 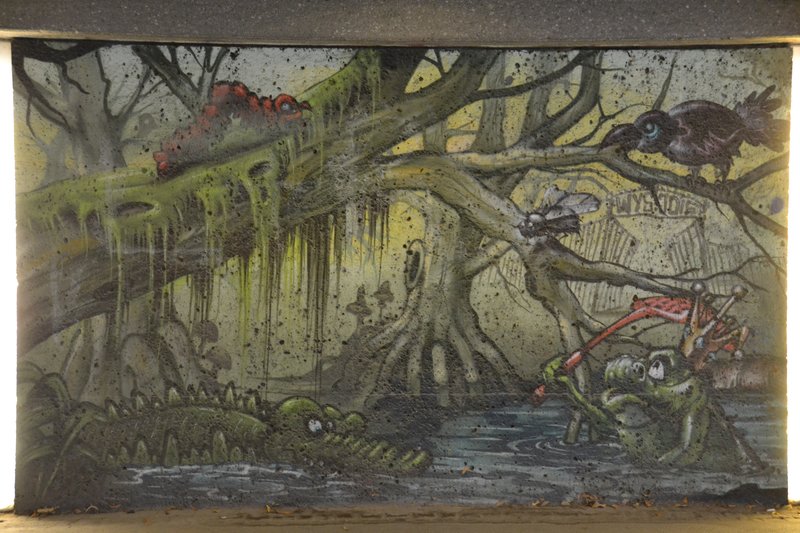 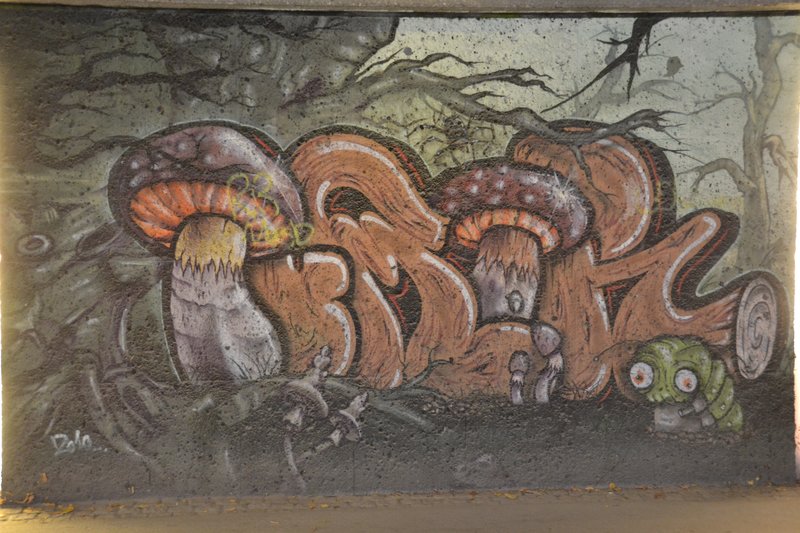 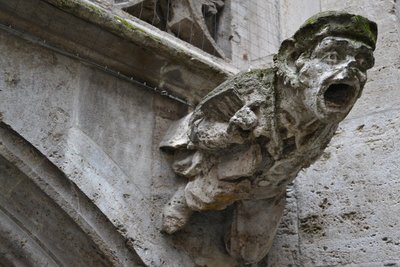 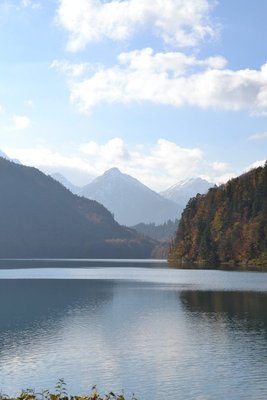 Love the 5 panels Daniel. Must be quite fantastic to see in real life. And love those beastie boy gargoyles. You have a bit of a collection now. I'm sure you'd like Scotland and they have plenty of peat in the highlands so all you would have to do is dig some up and you'd keep warm enough.
Cheers big ears

Good update, and what a cracker weekend to be in London...two bruising encounters and it all comes down to the clash we had been hoping for. We will be in the Peaks District next weekend and have selected a B&B with a pub in close proximity and a wifi connection for broadcast redundancy. We have also booked our travel to Norge, returning home the day before LikeTheGargoyles arrives...I suspect this means we will be away when you arrive, but we had the sense that your plans may be dynamic at the moment. Unsure if you are running email/phone yet but we can offer either a) our house (key drop through neighbour proxy) or b) accommodation at my College if you need it...just let me know.