So managed to negotiate the subway from the Airport to a point in space amazingly close to my hostel. This only required two line changes and my misunderstanding of clockwise versus anticlockwise. Incessant rain was the prevailing precipitation on offer. It necessitated a quick purchase of an umbrella, which henceforth will be referred to as the Divine Canopy of Auspicious Protection, in homage to problematic translation.

That misunderstanding added about 20mins to an otherwise quick hour trip. I was acting like I had four months to get to my hostel, so it probably would have been quicker! Once I exited said subway, merrily wondered past the street I was aiming for after 90 seconds, and continued about 1.5km past a plethora of musical shops. It was that situation, like in India, where groups of similar vendors operate. The purchase of a ukulele crossed my mind. So did a lynching by my fellow travellers for said purchase. After backtracking, I was literally back on track and ensconced in my hostel.

Cut to a few days later, have been to the Forbidden Palace, Tiananmen square, Beihai Park, Jingshan Park, Yong He Gong (Llama Temple) and the Great Wall. We are leaving Beijing for Mongolia the day after I write this.

Forbidden Palace was truly impressive. A maximum of 80,000 visitors are allowed entry each day, on the day I went about 20,000 umbrellas were present and at least half of these had some kind of interaction with my face. Mainly in the form of a quick stab in the eye.

Some fantastic names of the temples which I remembered from the various parks;

The Llama Temple was amazing, housed in the centre of the complex was an 18m carved Buddha. Carved from a single piece of white sandalwood, which must have come from a tree with a trunk 4m in diameter. Painted gold, a shaft of sunlight illuminated and lit up the surface like liquid gold. Long white, red and green swathes of fabric descended from the Buddha's open palm flowing like a cascading rainbow to the base. The smoothness of the golden carved robes defied any lingering of the eye, even light seemed to slide of it. The creation of such a statue would have been a divine experience.

This was still evident hundreds of years later.

Today we battled up the Great Wall of China. Felt like we did the entire thing, but, alas it was only a small portion. It destroyed most of us. Was a sunny day about 28 degrees, which probably didn't help the thermal properties of my black jeans. Idiot. The views were unbelievable. The terrain similar in stupidly steep terms as the Inca Trail. Hard to describe it because I am tired!

So train to Mongolia tomorrow, only one days ride and our first taste of train travel. There are 9 of us all up, good bunch of crew. Fingers crossed we all survive to St. Petersburg.

Auspicious Tidings of Serenity and Causation to you all! 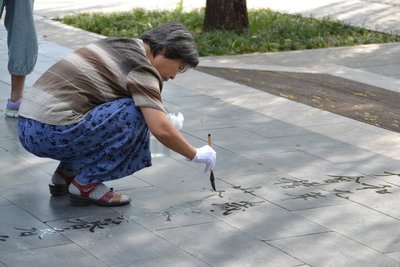 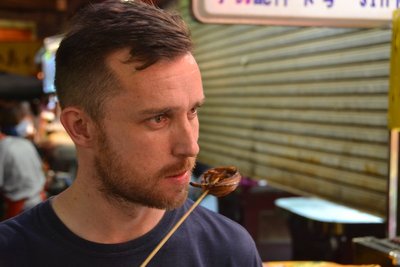 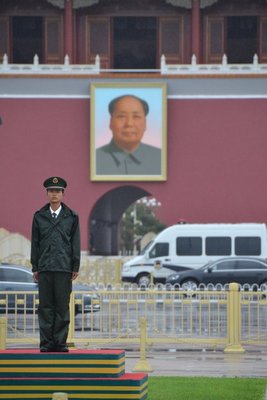 Next Table of contents

Loved your first blog Daniel and brings back memories of walking part of the Great Wall many years ago. We got a nice little certificate as reward to show for our efforts.Did you get a certficate? You must have umbrellas on your mind as that skewer also looks quite dangerous. What is on the end of it? I look forward to hearing how the train travel goes. Cheers

Fantastic, great to read the first blog. We have done so much walking around Cambridge that we feel that we might as well have walked the length of the Great Wall...

No such certificate was on offer, unless one purchased it. This I did not do. Nor did I get a t-shirt that says 'I conquered the Great Wall', because I didn't!
That photo is of me eating snake. Tasted like anchovy, except without the taste of seawater. I also ate scorpion and dove. Two of them, just to give peace a chance?!

Finally- something decent to read in the tea room at lunch. Sounds like you are having an ace time- despite the blunt force umbrella trauma. Keep up the good work and enjoy the snake-on-a-skewer while you can- it's boiled sheep and fermented milk for the next week or two.... Keep the blog posts coming!

We are heading off to the middle east tomorrow so won't be able to check for regular updates. I hope to read that you have crossed into the European zone by the time we return and head out to meet you in the Netherlands. Happy journeys!

by young cousin of the north

Loving the usernames in these comments so far, keep them coming!